Here is the third volume in the 12' Rulers serie dedicated to producer Jah Thomas. Due out for May on Greensleeves. 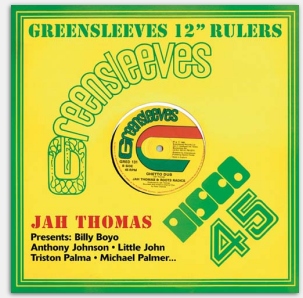 As you may know, Greensleeves records celebrated its 30th anniversary the late year and began a big reissue campaign, the occasion to revive their famous and classic 12” Disco 45s. While the Most Wanted series are dedicated to artists, 12” Rulers highlight on producers work. This third volume due out on May, compiles 11 dancehall tracks from Jamaican deejays recorded in the early 80’s. To quote some : two cuts by Tristan Palma with the 1982 hit Joker Smoker followed by Papa Bruce version, and the classic Ghetto Dance in duet with Michael Palmer. Also Billy Boyo with his Scandal of 1982 or Gunshot by Anthony Johnson sharing the mic. with Jah Thomas and Toyan. A recommended compilation - if you haven’t the original 12’’ - of Nkrumah Jah Thomas productions gathered for first time on CD.