New 12’’ release due out for May on British label Nuff Powa Records. 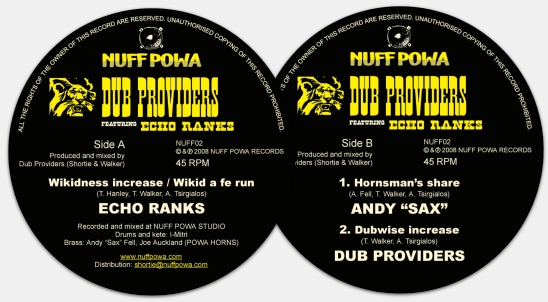 Here is the second single release from London based Nuff Powa Records. The label now presents its new 12’’ Dub Providers featuring Echo Ranks on vocals, delivering both singing and deejay cuts. After the heavy Wikidness Increase with conscious lyrics by Echo, two stepper dubs come on the flip side. First Hornsman’s Share with the powerful horns by Andy ‘Sax’ alongside I-Mitri on drums and kete, followed by Dub Providers’ Dubwise Increase.

A Dub Providers (aka Shortie and Walker) production that should delight steppa and digi-dub fans! Soon availa ble on 12’’ and digital download.