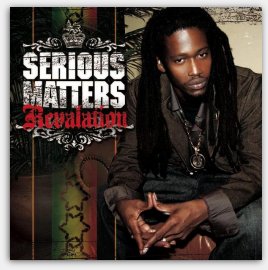 Here is Serious Matters, the debut album from Revalation, hailing from Virgin Islands. The young singer, native from St Thomas presents a fresh piece from roots to hip hop vibrancies produced by South Florida based duo, Dean Pond and Eno Stafford of Studio 340 who produced Pressure's first album The Pressure Is On. The result of this collaboration is a 15 track-album including Revalation biggest hit You Are Someone and two combinations with Nyorah on Petty Theif and Pressure on Real Revolutionary.

While positive messages are more and more rare nowadays in Reggae, Revalation's music is on the same vein as artists from VI (Dezarie, Midnite, Batch, Yahadanai to name just a few), conscious songs and fresh riddims. Due out in May.