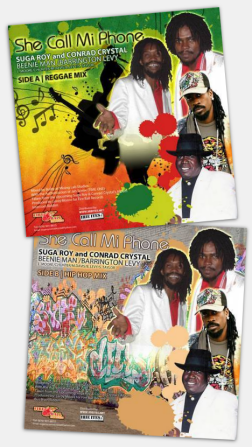 The Jamaican deejay Suga Roy comes with a new version over the classic Here I Come aka Intercom riddim now entitled She Call Mi Phone and soon available on 7’ on his label Fire Ball. The single includes vocals by Suga Roy and Conrad Crystal alongside dancehall stars Beenie Man and Barrington Levy and Joe Lickshot as special guest on the intro.

While face A is a reggae version, the flip side features the hip hop remix. Note that She Call Mi Phone is the first single issued from Suga Roy & Conrad Crystal upcoming album, which will only feature combinations on classic riddims with artists as Marcia Griffiths, Dillinger, U Roy and Congos to name just a few.