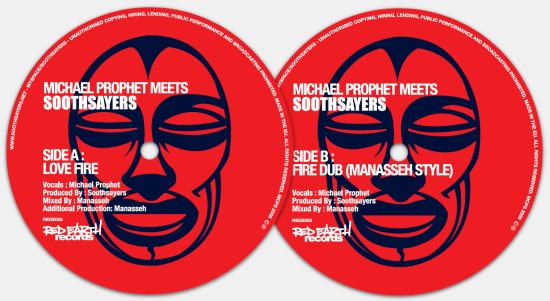 After releasing a first 7’’ with Johnny Clarke on vocals, here is the second single in the serie of roots releases from London based collective Soothsayers, due out on May, 12th on their label Red Earth. Michael Prophet delivers a killer tune, a pacifist and love song, on this version of the the Yabby-U’ Fire Fire riddim, here led by the great Soothsayers horn section. On the flip side, the Fire Dub by Soothsayers duo, mixed by UK dub producer Manasseh.

The Jamaican singer recorded with Soothsayers while they were working together with Mad Professor at the Sierra Nevada Reggae Festival in California, USA. This Love Fire is the first release of several recordings produced by Soothayers. Looking forward to the next one!