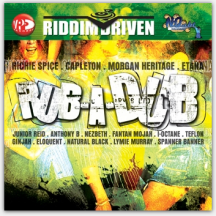 After releasing their new Rub-A-Dub riddim on CD in late January, No Doubt records now comes with the serie on 7’’. A one drop riddim voiced by Etana, Capleton, Anthony B, Fantan Mojah, Junior Reid and other Jamaican artists.

You may also heard it with Di Plane Land by Richie Spice on his new album Gideon Boot, I Am Not Afraid on Etana’s The Strong One or Nothing To Smile About from Morgan Heritage on Mission In Progress.

No Doubt records is reknown for its smooth roots productions, revealed with Gyptian's 2005 hit Mama on the Triumphant riddim or more recently with the song Daddy from Queen Ifrica.