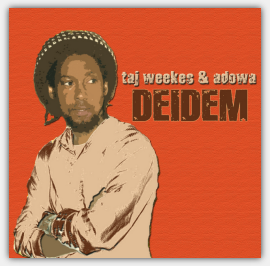 More than painting a realist portrait of our planet and society through out his music, Taj Weekes is working as Goodwill Ambassador to the Caribbean and as founder of his charity, They Often Cry Outreach, which is dedicated to improving the lives of underprivileged, at-risk and orphaned children around the world.

Here is the first single issued from Deidem.