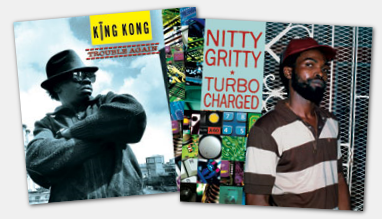 Greensleeeves follows to revive dancehall from the good 80’s digital era soon releasing two classic albums produced by King Jammy. The first one is late Nitty Gritty’s 1986 debut album Turbo Charged, a 10 tracks set including several killers as Hog In a Minty on Tempo riddim, Turbo Charge and Gimme Some A Your Something. The reissue also includes five bonus tracks (Run Down The World, Man In A House, False Alarm, Gimme Some A Your Something and Hog In A Minty in discomix).

Second one is Trouble Again by King Kong. Originally released in 1986, it features classics from the Jamaican deejay, as Follow Me, Mash It Up Already, Mix Up and Move Insane. As with Nitty Gritty reissue, we found five bonus including three available for the first time on CD (Move To The Top, Paranoia and the killer Paro Them Paro). Both albums firstly released in 1986, have already been reissued on a same CD in 1992. Available on 28th of July.