Etana Is In Europe

Etana Is In Europe

The new female reggae sensation starts an European Tour to promote her debut album, The Strong One.

Few people knew her name and her voice some months ago, she’s now on the light with the release of her debut album The Strong One, that probably be on the top of summer reggae charts.

Etana, the Jamaican soulful singer and songwritter will be soon in Europe and more particularly in England and Ireland to present her first set, gathering reggae, soul, pop and jazzy vibrancies. She starts her tour tomorrow, with a show in Cardiff and will round off at Brixton Academy, in London on 2nd of July. 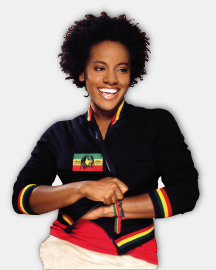 Here are the scheduled dates :