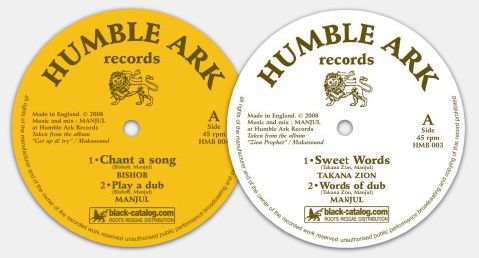 French reggae producer and musician Manjul’s releases in limited edition two new 10'' on his Humble Ark label, featuring Takana Zion and Bishob on vocals. First release features Sweet Words by the talented singjay Takana coming out of Guinea (West Africa), and on the flip side, Manjul’s World Of Dub version.

Second 10" features an other up-and coming reggae artist out of Africa, known under the name of Bishob. This soulfoul singer native from Nigeria who moved for Mali in 1996, presents the deep Chant A Song on a fresh roots riddim by Manjul. Takana’s Sweet Words and Bishob’s Chant A Song are issued from their respective albums, Zion Prophet released in 2007, and Get Up and Try in early 2008. Recommended for those who missed the two albums out on Makasound's label Makafresh.