The new album from the veteran guitarist is a tribute to Bob Marley. 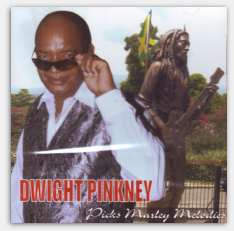 The veteran Jamaican guitarist, Dwight Pinkney, has released his fifth album, a 13 track set of Bob Marley instrumentals entitled Picks Marley Melodies. A former member of the group The Sharks, and a session player with the Wailers in their early days at Studio 1, Pinkney has selected 12 songs spanning Bob’s run of releases from the ska era through to the final track on his 1980 album Uprising.

In an interview with the Jamaica Observer Pinkney explained that "The motivation for doing this project, is the pleasure of seeing somebody who we have worked with in their formative years, blossom into a major world icon musically."

The songs chosen for re-interpretation are One Love, Jammin, Three Little Birds, Nice Time, Put It On, Simmer Down, Screwface, Trench Town Rock, No Woman No Cry, Waiting In Vain, Redemption Song and an early, lesser known work Let Him Go. In addition Pinkney has composed one tune of his own, entitled Bingy Reggae.