K-Salaam asks Whose World Is This?

K-Salaam asks Whose World Is This? 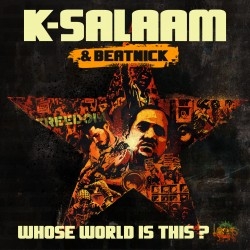 Whose World Is This ? is the new album from Iranian born producer K-Salaam alongside young American producer Beatnick. With his new set, K-Salaam "wanted to create something that would serve as a voice for people who do not have one".

The result is an 18 tracks set including vocals by well known artists of the hip hop and reggae scenes such as Sizzla, Buju Banton, Luciano, Capleton, Jamelody and Anthony B as well as the rappers Trey Songz, Talib Kweli, Dead Prez, Kardinal Offishal and Outlawz. A new set full of conscious tracks - such as Buju Banton and Trey Songz’ Street Life, Anthony B’s Revolution  or Sizzla and Young Buck’s Babylon (Must Be Mad) - more than meet -Salaam’s intention. Out on July 28 on VP Records.