A brand new album for Toots and The Maytals

A brand new album for Toots and The Maytals 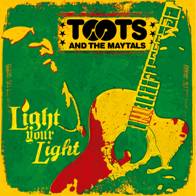 The veteran Toots Hibbert comes back with a new album to be released on 8th October. Light Your Light, on Fantasy records, celebrates the 45th anniversary of the formation of The Maytals with Toots Hibbert !
Toots & The Maytals present new tunes and brand new versions of great songs from the 1970’s and 1980’s period such as Johnny Coolman, Pain In my Heart , a tribute song to Ottis Redding or Premature . The whole is produced by Richard Feldman and Toots is still backed by his tour backing band.

On Light Your Light, Toots Hibbert is still spreading the same message of love on some ska & reggae riddims.