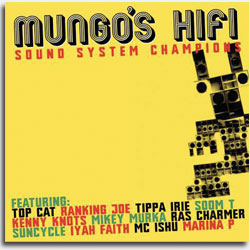 Rasta Meditation featuring Kenny Knots or Songs of Zion with Ras Charmer… If you went to dances, notably in Europe, the past two years, you probably heard both tunes produced by Mungo’s Hi Fi. The crew of Scotland now releases Sound System Champions, a 12 tracks album from ska and rocksteady, through roots and steppers, to rub a dub, digital roots and dancehall. It features new tracks by Ranking Joe, Tippa Irie, Kenny Knots or Mikey Murka, and some of their productions previously released on their own Scotch Bonnet label (Divorce A L'Italienne by Italian female singer Marina P, Kenny Knots’ version of Heavenless Riddim Rasta Meditation, Herbalist by Top Cat…).

Now available on Rockers Revolt label while the release in stores is scheduled on 8th of September.