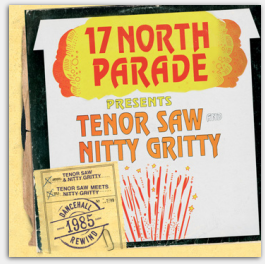 After the reissue of Turbo Charged by Nitty Gritty on Greensleeves in July, here is another scorcher from the Jamaican deejay alongside his friend Tenor Saw. This time, 17 North Parade reissues Power House Presents Tenor Saw And Nitty Gritty, produced by George Phang in 1989 for his label Power House.

17 North Parade Presents Tenor Saw Meets Nitty Gritty features the original 8 tracks plus four killers of each deejay, originally released as single in the 1980’s. Including Ring The Alarm, Pumpkin Belly, No Work On Sunday and Golden Hen by Tenor Saw, and False Alarm, Hog In A Minty Gimme Some of Your Something and Run Down The World by Nitty Gritty. Due out on September.