From US based label Forward Roots, distributor for Wackies, come two reissue 10s, one on the Forward Roots imprint and the other bearing the Wackies brand. 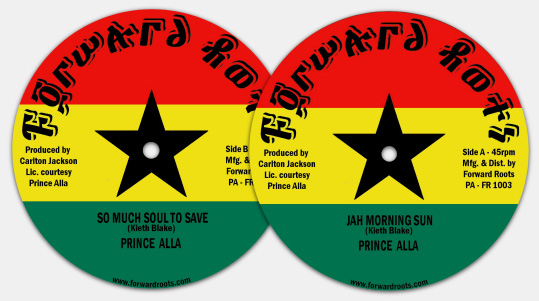 The Forward release contains two classic early 80s Prince Alla roots sides, produced by Carlton Jackson and fading, showcase style, into King Tubbys dubs. An unsubtle yet deeply moving instrument, Allah’s fervent voice invokes the mysticism of the Old Testament era for Jah Morning Sun, over a phalanx of militant drumming topped with smooth sax. So Much Soul To Save takes the template of Bob Marley’s chastising So Much Things To Say, giving it a more positive bent, to a rub a dub beat furnished with classical reggae percussion favourites the guiro and flexatone. 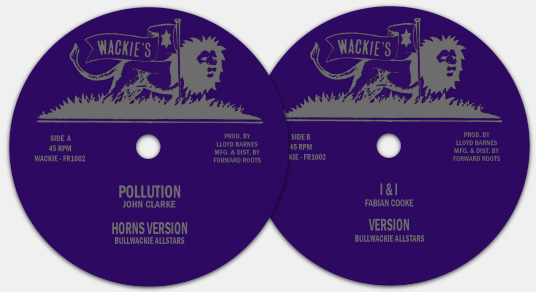 The Wackies 10’s A side features the distinctive baritone of John (not Johnny) Clarke singing Pollution, a slightly different cut to the one featured on his Rootsy Reggae album. As with Abortion, another track from Rootsy Reggae, Clarke expresses his beliefs in an artless manner, but his heartfelt and prescient protest against the exhaust fumes and smog of the city contrast sharply with the bourgeois one-upmanship of mainstream environmentalism today. Baba Leslie’s saxophone honks ominously, like the horn of a gridlocked car, underpinned by the song’s busy early reggae style rhythm. On the flip Fabian (not Fabian the female singer for Jack Ruby) Cooke sings a message of peace and solidarity over a pared down rocksteady influenced backing.

These interesting curios from Wackies will excite fans of the New York scene, while the Allah discomixes have a more general roots appeal. All in all, both 10s are well worth checking out.