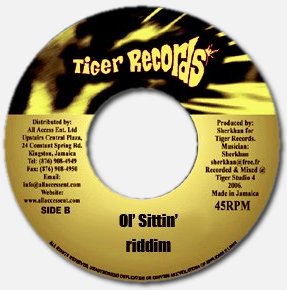 After the Skylarkis riddim released on january 2007, the french producer Sherkhan who lives in Kingston since 2003, comes back with the Ol’sittin riddim released in 7” there is two weeks ago on his Tiger records label.
Like on his previous productions, Sherkhan controls everything. Recorded in his studio in August Town (Kingston), he plays himself the different instruments (except drums) and has mixed and produced the different tracks of this serie.

Sherkhan will also release the dancehall Arena riddim with Busy Signal and Teflon.