Follow up to the Hard Drop Riddim from the London based label. 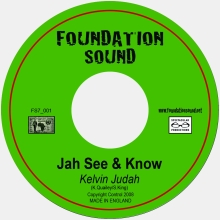 Here is a new 7’ single out of London based label Foundation Sound. It starts with a conscious tune by Kelvin Judah lead by a strong bass line and featuring live brass from Shofar Horns. Side b has the dub version produced by King Sammy and mixed by Nick Manasseh. A nice new UK dub stepper 7’.

Foundation Sound was originally setup in 1981 by Tony Roots, after spending time in Jamaica and selecting on tour with Joseph Hill and the mighty Culture. Joseph Hill named the sound system Foundation Sound. In the 1980's and early 90's Foundation promoted many dances around the UK including shows with Culture, The Wailers, Eek A Mouse, Tappa Zukie and The Twinkle Brothers. In the Late 90's Tony Roots linked up with a crew of youths including his son D-Boy, Pappa Barn, Jethdub, Eddy Foundation & Guvnor who rebuilt the sound system. From those times Foundation Sound has evolved into a studio, record label & sound system that continues to work with many different UK, JA and international artists & sound systems both live in session and in the studio.