For its fourth edition, the UK Reggae Boss Sound Festival will be held on October 18th and 19th at the Newcastle Carling Academy (Westgate Road, Newcastle Upon Tyne, NE1 1SW). While 2007 was dedicated to legends from the reggae golden age, 2008 brings together veterans like Sly& Robbie and Misty In Roots, as well as reggae newcomers like Natty. Here is the line up : 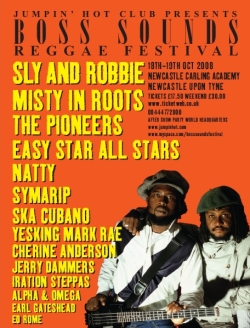 Official After Party on the 18th at World Headquarters
Curliol Square, Newcastle Upon Tyne NE1 6UQ
11pm – 4am Alpha and Omega Jerry Dammers