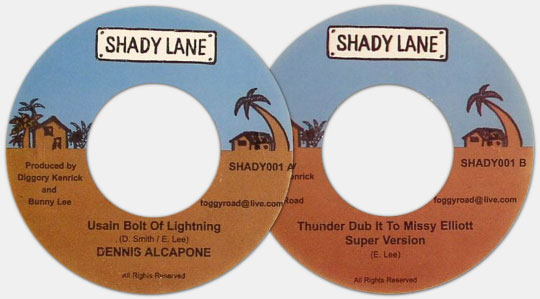 Since Usain Bolt’s world record last summer in Beijing, at the Olympic Games, several artists as Cocoa Tea and Hopeton Lindo paid tribute to the Jamaican champion. Now, this is the UK based Jamaican deejay Dennis Alcapone who sings in honour of Jamaica new hero, with Usain Bolt of Lighting, his new single released by the UK label Shady Lane.

The release features Dennis’ cut on the Queen of the Minstrel riddim, produced by Diggory Kenrick and Bunny Lee and backed by Sly and Robbie. This first release on Shady Lane label is the deejay piece to the hit Need You Bad by r’n’b female singer Jazmine Sullivan produced by Missy Elliot. Don’t miss the side b including the heavy dub version. Out now on vynil and for download.