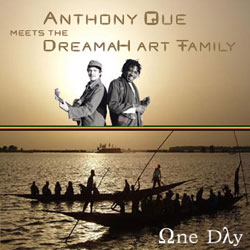 Both men present 12 tracks mixing reggae in an acoustic style with soul, pop, blues and jazzy vibrancies. Supported by Dreamah on guitar - who composed all the music of One Day - and Luca at drums, the soulful Jamaican singer and songwriter keeps on delivering conscious lyrics as per his three previous albums. A smooth and mellow new set out now.