A new album for Daweh Congo!

A new album for Daweh Congo!

Check out the first single issued from his new album Ghetto Skyline. 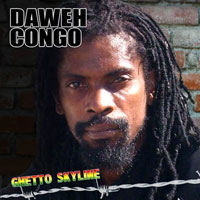 Here is a good news for the beginning of 2009! Four years after Health and Strength, Daweh Congo, the one who is often compared to Burning Spear, comes back with a new album. Called Ghetto Skyline, this sixth album features 13 new tracks produced by Swedish Jonah Gold from Goldheart Music. According to the press release, this new effort «  is a widening of the concept of Daweh Congo. Without ever leaving reggae and the conscious vibe that has been his trademark, the influences range from blues to hiphop ».

Awaiting the release, we invite you to listen to Ghetto Skyline, where the Jamaican delivers once again his unique and strong singing style. This is a nice introduction to the new album, due out on January, 23rd on Goldheart Music.