Tarrus Riley is working on his new album scheduled for March 2009. 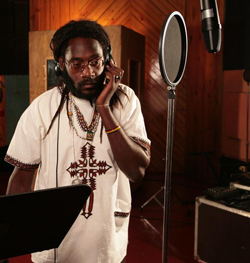 According to the Jamaica Observer, Tarrus Riley’s newest album is scheduled for a March 2009 release. The new effort should include collaborations with Damian 'Junior Gong' Marley, Etana, Allison Hinds and Demarco. Expect many new tracks, but also a few cover songs, including a Bob Marley riddim. Tarrus is currently recording at Grafton Studios in Kingston. "We are not trying to compete with Parables or anything like that but we should come up with something unique and musical," Frazer said to The Jamaica Observer.

Saxophonist Dean Fraser takes management and production duties for Tarrus Riley's new album, as for his previous two, Challenges and Parables. The combination of Dean and Tarrus is a proven one, so there can be little doubt that this third effort will be in the same vein, delivering quality modern roots and conscious reggae. More info soon, stay tuned!