Follow up release to the Inspiration Information series launched by Amp Fiddler and Sly and Robbie. 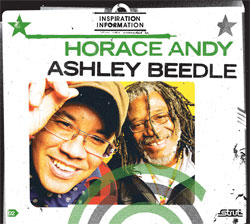 Veteran Horace Andy, also known for his collaboration with Massive Attack linked up with UK producer and remixer Ashley Beedle for a new and unique soundclash.

This new album in the Inspiration Information series was recorded during five-day writing and recording session in London in late September. The result is a 10 track set produced by Ashley Beedle who « draws on all of his diverse musical influences to create a collection of fresh roots fusions, ranging from dancehall to dubstep » as the PR says. Due out for release in February.

Check out The Light, the first single with Mr Andy on vocals.