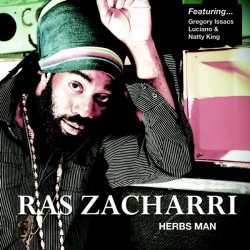 It’s good to see that there are still conscious modern roots artists on the reggae scene.

Ras Zacharri, who has released several singles for Jamaican and European labels, finally presents his debut album. Called 'Herbs Man', it features 14 tracks, including combinations with Luciano, Gregory Isaacs and Natty King, and his previous released tunes like Jordan River, Herbs Man or Ruff Road. Out now on the Shem Ha Boreh records.