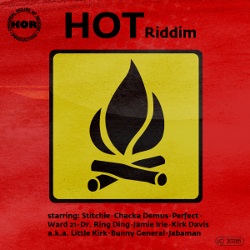 Last time we discussed House of Riddim on UnitedReggae, it concerned their great rootsy riddim called Conquerer. The Austrian team is now back with a fresh new dancehall rhythm called the Hot Riddim. The Hot series recalls the 90’s dancehall productions and that’s why it features veterans like Stitchie, Chaka Demus, Kirk Davis and Bunny General, alongside « younger » artists such as Ward 21, Dr. Ring Ding, Perfect, Jamie Irie and Jabaman.

Unfortunately, the series, including some serious tunes, won't be available on 7’’ but only for digital download on all major download platforms from October 30th 2009. Check out the megamix !