Linval Thompson on the Ruff riddim

Linval Thompson on the Ruff riddim

Here is Linval Thompson version on this 2007 riddim. 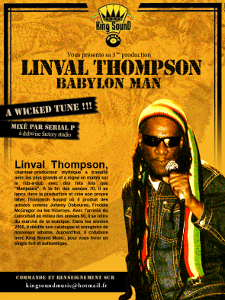 After the good Hail HIM by Rod Taylor (October 2007) and Global Situation by Anthony John (October 2008), the french label King Sound Music releases another 7” this month on its Ruff riddim with the great Babylon Man by Linval Thompson.

King Sound Music was created in 2006, in Montpellier, South France and the KSM band is composed of William ‘Willybasse’ Humblet on bass, Jerome ‘Rom-J’ Quintane on drums and Christophe ‘Kptn’ Raimondi on keyboards.