To be released in March on Oneness Records. 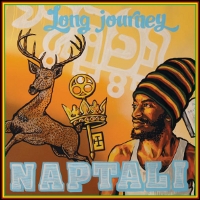 To be released by Munich based Oneness Records, on CD and download, on 12th March 2010 is the debut album from Naptali called ‘Long Journey’. It’s a rootsy sounding album and features collaborations with top names Luciano, Lutan Fyah, Arofat and Sara Lugo.

His name is derived from ancient Hebrew and biblical texts and according to the press release it “signifies an ancient ancestry and it is the divine legacy which reggae singer Naptali has inherited to continue”.