A First for Walkup Records. 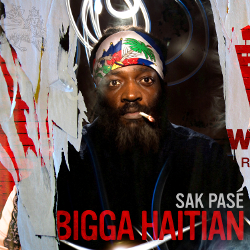 The album received great critical acclaim and its popularity has now meant that they feel the time is right to give the album a full CD launch, which is also a first for the label.

The CD, released on 9th February, also comes with the added bonus of an instrumental version of "I Am A Haitian" featuring saxman Jerry Johnson.

For a review of the album see https://unitedreggae.com/articles/n290/102609/bigga-haitian-sak-pase