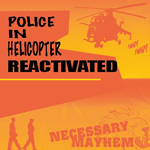 London based label Necessary Mayhem has released brand new tunes over his recut of classic Police In Helicopter by John Holt. Due to the success of the first singles, producer Curtis Lynch returned to the studios and voiced up-and-coming artists Maïkal X and Joggo but also Ziggi and YT in combination with Mr. Williamz.

The series also includes the previously released cuts of Million Stylez and Mr. Williamz. Out now on 7'' and for legal download.