Fourth release coming soon in this 7 inch vinyl only series. 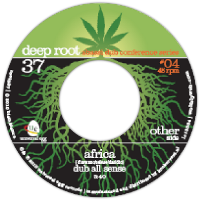 The Abassi All Stars in collaboration with Deep Root present the fourth release in their Dub Conference series, which sees a co-written tune being mixed by themselves and an invited production team, with the results presented on strictly limited 7 inch vinyl only.

This time they have enlisted the talents of Dub All Sense from Caserta, Italy and the release, 'African Pressure' by Abassi All Stars on the A side with 'Africa' by Dub All Sense on the B, is due out on the 12th April on a rather fetching PINK vinyl.