The promising up and comer delivers a first rate EP. 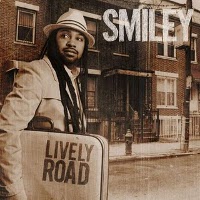 While the Reggae listening world continues to wait for an official full length album from the artist, the very impressive up and coming Dutch based singer, Smiley, delivers something to keep his name in the minds of fans across the planet, a strong seven track EP release, 'Lively Road'. Having originally popped up on the radars of most with Dem A Wonder, a sublime combination tune alongside Jamaican veteran chanter, Junior Kelly, and produced by the well respected Al.Ta.Fa.An. crew, the Aruba born Smiley has continued to push strong material to the masses, making his expected debut release very anticipated for many.

The EP comes via the same Holland based Love & Unity Music who has handled Smiley's previous international releases, a couple of which, the aforementioned Dem A Wonder and the big hit Distance are also included on this release. Along with the previous singles, fans can look forward to five additional relatively fresh tunes, such as the House Of Riddim produced Big Money Bag and the booming herbalist anthem Da Weed.

Smiley's EP 'Lively Road' is set to be released to etailers worldwide via Love & Unity Music on May 24 and the physical EP can be ordered on Smiley's website: www.smileymusiq.com