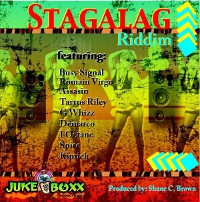 First the Nylon Riddim in 2008, then Indiscretions and Dub Wise Riddims in 2009. Now Jamaican producer Shane Brown comes with The Stagalag. The rhythm of this new release is a recut of the popular Stalag Riddim. Originally produced by Winston Riley for his Techniques label in the early 1970's, it has been the bedrock for over 150 reggae cuts.