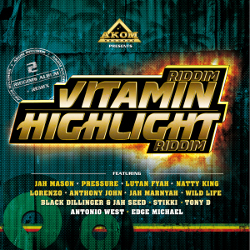 Check out this new « 2 riddim album » produced by Dub Akom Records. The 21 track CD contains the full series of the Vitamin and Highlight riddims plus The Relight, an exclusive dancehall remix of the Highlight riddim.