Stronger Than Before by Jah Thunder

Stronger Than Before by Jah Thunder 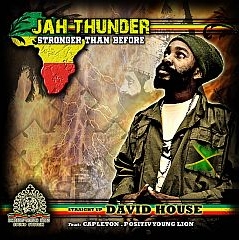 We had to wait 10 years for French label Nouvelle Génération to finally release Jah Thunder’s first album called 'Stronger Than Before'. Jah Thunder began at David House along with his cousin Capleton and artists such as Jah Mason, Military Man, Moses I, Uplifter and many more. During all these years he recorded some good songs such as Hype (Millenium Taxi Riddim), Squad 51 (Live On Riddim), Know My Heart (Revival Dub Riddim), Give A Little Love (Time Will Tell Riddim), Find Time (Shaedee Riddim) and the great One One Cocoa (Organizer Riddim).

This street album features some songs already released such as Stronger Than Before (Battlefield Riddim), Hold You Own (Fondation Riddim) and his hit Fire (Martial Arts Riddim) alongside unreleased ones. It includes combinations with Natural Black on The People Dem Call Fi Help and French group Positiv Young Lion on People Let You Down and Who Jah Bless. Available now at La Boutique des Artistes.