Flashback to the 90s with Buju Banton and Wayne Wonder

Flashback to the 90s with Buju Banton and Wayne Wonder 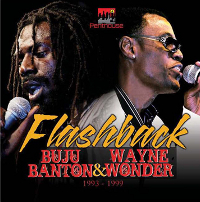 Duets between Buju Banton and Wayne Wonder really left their mark on reggae music in the 90s. So it is a pleasure to find this new release from Penthouse records released on June 22nd. This compilation is the occasion to rediscover combinations between these 2 artists such as the great Bonafide Love (Movie Star Riddim) but also What Ya Gonna Do (Swing Easy Riddim), Massa God World II (General Riddim), Reunion (Extotioners Riddim) and many more. All songs were recorded between 1993 and 1999.

There are also some solo singles produced by Donovan Germain such as Bad Boy (Handsworth Revolution Riddim) and the good Sensimella Persecution (Swing Easy Riddim) from Buju Banton.