VI Connection back in action.

Don't be at all embarrassed if the label VI Connection from out of France sounds somewhat familiar to you, but you can't quite pinpoint where you might know them from as they haven't exactly been the most active group on the scene. However, as evident by their most popular release, The Sane Kry Riddim, way back in 2006, when Neeko and company have something coming up, they do a tremendous job. So, if that's still the case, then listeners can well look forward to their latest creation as VI Connection, in association with Patate Records presents The Things Tough Riddim. This one was also done quite some time ago, but its impact isn't at all diluted just a few years on.

Obviously the label is named so because of a wonderful relationship had with the Virgin Islands' Reggae scene and artists from out of the VI so the roster on the the Things Tough Riddim shouldn't come as much of a surprise none at all. Big and respected VI artists Batch, a recently re-energized NiyoRah and Ras Abja all appear on the riddim and are joined Little Kirk [aka Kirk Davis] from out of Jamaica as well as the seemingly Garnett Silk inspired singer, Avaran, from the Bahamas.

The heavy Things Tough Riddim from VI Connection and Patate Records will be available later this month on 7" singles as well as through iTunes. 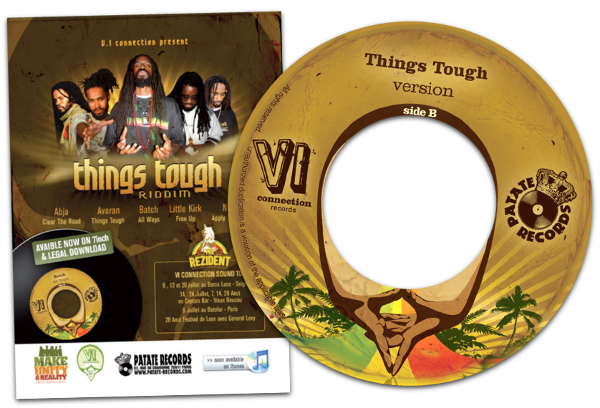