Check out the dates of the I Grade Family Tour featuring Niyorah, Toussaint and Tuff Lion. 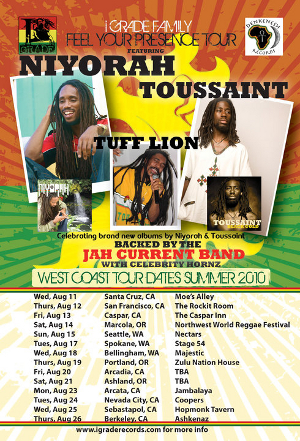 Virgin Islands I Grade family is on the road during all this month ! Since August 11, singers and musicians Niyorah, Toussaint and Tuff Lion will be touring the West Coast, backed by The Jah Current Band, in order to celebrate the release of their respective latest albums. While Toussaint has just released 'Black Gold', Niyorah will present 'Feel Your Presence', out since June 2010 and Tuff Lion his album 'Ten Strings' (2008).

The crew start to perform on August 11 with a first show in Santa Cruz, California, and will end the Tour on August 26 in Berkley, California. Check out below all the dates :