Irie Sounds International releases a live from Sugar Minott recorded three years before he passed away. 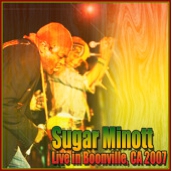 Here is a tribute to Sugar Minott album released by Irie Sounds International a few weeks after his death. This is live album recorded in 2007 at Sierra Nevada World Music Festival (Boonville, California). It features hits from the singer such as No Vacancy, Oh Mr. DC, Tune In and many more. The four first tracks are from his daughter Fire Pashon (aka Pashon Minott) who often provided support for his father.

This live album was released on August 24th and is available for download on itunes.