Jah Cure announces the release of his new album. 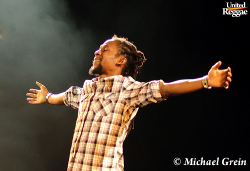 Jah Cure has just announced the release of his new album which will be entitled 'World Cry'. It should be out at the beginning of next year. This summer Jah Cure asserted during one press conference that it was by far his best album since his debut.

On this new project we should find singles already released as 7" vinyl such as Before I Leave (on the Cardiac Bass Riddim) but also some new productions.