New reggae magazine proving to be a success.

Back in January of this year we reported on the launch of a new bimonthly magazine called Irie Up. It would appear that the magazine has been a 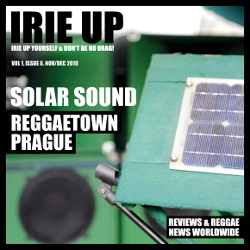 success and now as they edge towards their first anniversary they have just published issue 6.

In this time the magazine has grown to include CD and vinyl reviews along with its usual mix of technical insight into soundsystems and production, varied interviews from greats like Sugar Minott and U Brown to newer names like Japanese collective Tribe Sound and just generally keeping people informed of what is happening on the reggae scene the world over.

In this latest issue you will find interviews with Internal Dread, the Swedish analogue specialist and Ireland’s Dub Investigation talks about productions and future projects. On the techy side they meet the Gaggeldubbers, who have developed a fully independent solar powered soundsystem that opens up a new range of possibilities for sound crews. Then there is a look at what is happening in the Czech Republic with the story of reggae, dub and soundsystems, from the fall of the Iron Curtain and the rise of the free tekno soundsystem scene to the roots and dub revival in Prague, plus an introduction to and brief history of the soundsystem scene in Manchester, England and much more.