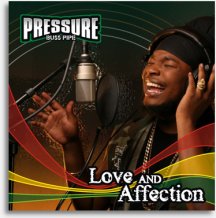 After cooperating on several singles this year, jamaican producer Donovan “Don Corleon” Bennett is about to release awaited Pressure second album Love and Affection. This set features 16 songs including 6 already released as 7 inch in 2007 on Don Corleon records - Love and Affection, Ghetto Life, Be Free or recent So Appealing to name a few.

Born in 1981 in US Virgin Islands, Pressure “Buss Pipe” released a noticed first album in 2005. This second one is due on 6th November 2007 with 2 other Don Corleon produced albums, Sacrifice by Alaine and Bad From Mi Born by Munga.