One of the biggest names in German Reggae wraps up 2010 in style.

Arguably the biggest shot in Reggae production in the country of Germany, the Pow Pow Movement, is back with a potentially huge release - Its latest composition and release, the Everlasting Riddim. 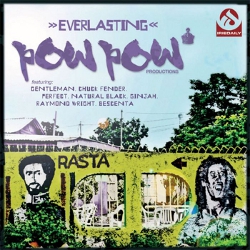 As usual, the piece is an excellently crafted project and features a healthy mix of established names and Pow Pow favourites alongside lesser known and up & comers hoping to catch the eyes and ears of listeners over this big vibed riddim.

Such as who? Of course German Reggae superstar Gentleman is on board with the tune Everlasting Love, a highlight from his album 'Diversity' from earlier this year. With him, Gentleman has brought the likes of Natural Black, Perfect, Bescenta, Ginjah and Chuck Fenda on the high end. But hopefully names such as one of 2010's biggest breakout young artists, German Sara Lugo, big Aruba native Smiley, Nature, Malijah and others are set to make big impacts on fans smart enough to pick this up as well.

You can show some brainpower and grab up Pow Pow's latest potential masterpiece, the Everlasting Riddim, when it drops on CD and digitally, December 10.