Digital Revolution by Steely and Clevie

Digital Revolution by Steely and Clevie

Jamaican-born production team Wycliffe "Steely" Johnson and Cleveland "Clevie" Browne are more than producers - they are pioneers of dancehall reggae's digital age. Thus, it is only fitting that this compilation album featuring their top hits is deemed 'Digital Revolution', set for release on January 25, 2011 from 17 North Parade, a division of VP Records. 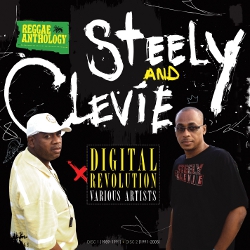 Having built their world-renowned reputations as studio musicians, with Steely playing keyboards and Clevie playing drums, the duo rose to prominence as the house band at King Jammy's studio at the time when drum machines were first introduced on reggae records. They quickly became Jamaica's hottest production team and together forged a sound that would rule the dancehall scene for decades. Their imprint logged numerous top Jamaican hits and multiple U.S. crossover radio hits from 1989 to 2005.

'Digital Revolution' is a three-disc collector's edition that includes 42 of their most influential and biggest hits on discs 1 and 2. Disc 3 is a DVD that contains a 1988 interview and studio demonstration with Steely and Clevie filmed for the Jamaica Broadcasting Company (JBC), as well as a 2005 interview with the producers sponsored by Red Bull Academy. This collection presents fan favorites and rare insight on two of reggae's most influential producers - a must have for collectors, and fans, everywhere.