Something for everybody with a love for ska.

Last year we reported on how London will be hosting an international ska festival from the 21st to 24th April 2011 at the Clapham grand theatre, 21-25 St John's Hill, Clapham Junction, London.

The full line up and what artist will be appearing when has now been announced and with over 30 bands and DJs from 11 countries performing and spinning some of the finest global ska talent from it's roots in America rhythm and blues, to the Jamaican originators and the progression into rocksteady & reggae, through 2 tone and right up-to-date with 21st century ska sounds at the event there is bound to be something for everyone. Each nights show starts a 7pm and runs through to 3am, with a club night after the bands have finished, except for Sunday which will finish at 2am. 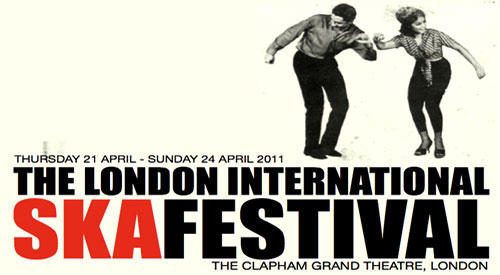 To get things under way on the Thursday Mr Rocksteady himself Ken Boothe is to headline, while also on the bill that evening are the grammy nominated James Hunter, Italian combo Giuliano Palma & the Bluebeaters plus Maroon Town, who will be promoting their soon to be released new album ‘Urban Myths’.

Friday night will see another of the original big names in Jamaican music as Dave & Ansell Collins reunite for the first time since the 1970's.  Support is supplied by the suitably named Trojans, The Loafers and Hotknives, who both appeared at the first London Ska Festival, with European flavourings being added that evening by Belgium’s The Caroloregians, Skaos from Germany and representing France Les Ejectes.

Saturday is the turn of the (English) Beat starring Dave Wakeling. The Beat were one of the 2-Tone era’s biggest bands with hits including   'Mirror In The Bathroom', 'Too Nice To Talk To’ and 'Hands Off She's Mine'. Also on the bill are Dub Pistols, Intensified, Napoleon Solo, The Amphetameanies and Do The Dog’s Jimmy The Squirrel.

Bringing things to a close on the Sunday are one of Jamaica’s best loved male/female duo’s Bob Andy & Marcia Griffiths, plus all the way from Japan The Ska Flames, Bim Skala Bim from the USA, and for the UK The Sidewalk Doctors and Cartoon Violence.

DJ line up is just as striking with on the opening night Rhoda Dakar (The Bodysnatachers/Special AKA) & Takeshi Okawa (Ska Flames) followed by a Club night of Tommy Rock-A-Shacka meets Clive Chin (Randys). Friday has DJs Jim Cox & Greedy G, with the Club night catered for by Gaz Mayall (Gazs Rockin Blues). On Saturday it’s DJ Felix Hall plus at the controls for Club night are Lynval Golding (The Specials) & Wrongtom's Ska Revue. Finally Sunday has ex Radio 2 and huge 60’s ska fan Mark Lamarr with The Tighten Up Crew ft. Champian MC while the closing Club night is played out by Dub Vendor All-stars with Papa Face & Oxman.

There are some big names on show and each night has the promise of being full of great entertainment, which organisers hope will lead to this becoming an annual event. So if you want to be a part of this dawning of a new era visit