Perfect will be in Europe for a tour with Kanga Roots sound. 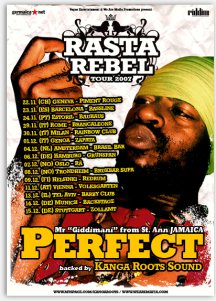 Perfect will be touring in Europe and Israel from 22nd of November to 15th of December. His Rasta Rebel tour will be backed by german Kanga Roots sound system.

This singjay from St Ann, Jamaica, revealed in 2005 with the song Handcart Bwoy is actually working on his second album'Born Dead With Life' due to 2008 with austrian label Irievibrations records that already released his songs Love Bird and Brown Eye Virgin on Carribean riddim.