Originally released in 1985 on the Black Victory label this rare album is to see the light of day again courtesy of Dug Out. 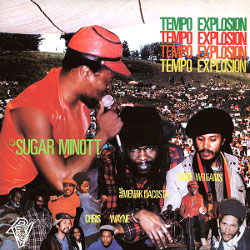 It’s a one riddim album that plays on King Tubby's classic Tempo riddim and is hailed by many as being one of the best of its kind.

There are only eight short songs, but each one is sublime in its own way. The first four cuts are vocal versions from such respected artists as Willie Williams, Chris Wayne, Ras Menlik Dacosta and Sugar Minott, who also co-produced the album with Bullwackie and each of these artists brings their own distinct style to the table.

The final four are instrumental cuts with the smooth sax of Jerry Johnson, who more recently appeared on Burning Spear's 2009 Grammy award winning ‘Jah Is Real’ drifting on top of one while the other three are from The Black Roots Players who add real dread and menace with their ‘Slow Tempo’ version.

This album with its meticulous and mesmerising mix of electronic and analogue techniques is sure to appeal to fans and collectors of the digital revolution that took place within 1980’s reggae.