Tiger Records Contest - And The Winner Is...

Tiger Records Contest - And The Winner Is... 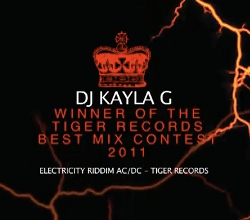 Earlier this year Sherkhan, the French producer from Tiger Records based in Kingston, set a mix contest to see who could come up with the best take on his latest riddim the Electricity Riddim.

Once the closing date of the compotion was reached the three judges DJ FLASH (TRINITY), ELMAR (SENTINEL) and CROSSFIRE (UNITY) sifted through the numerous entries looking for the most original and interesting mixes that had made good use of samples with meaning / messages etc, scratching, studdar effects and just about anything else that they had wanted to use to grab their attention. In the end the vote was unanimous with a young 16year old lady from Brooklyn, New York KAYLA G impressing the judges the most.

and a selection of other mixes at http://www.youtube.com/user/Tigerrecordsjamaica

The full vote details, with judges comments were as follows:

CROSSFIRE (UNITY)
1. KAYLA G (Most vibes, well blended, SFX had a vibe, the songs were mixed short but not too short… nice for anyone who wanted to preview the riddim)
2. SELECTA IRIE
3. SELECTA PROZ
Mention to RAS CLOUD (Most original and personal)