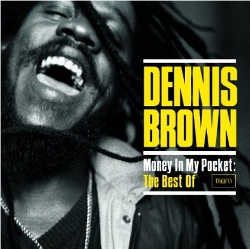 Following on behind from VP’s ‘Dennis Brown at Joe Gibbs’ release earlier this year is this 2CD retrospective of Dennis’ releases through Trojan, Creole and RAS titled ‘Money In My Pocket’, after his major hit from 1979.

This set, released through Trojan records, does feature some of the songs on the VP release like both the original and afore mentioned hit version of Money In My Pocket plus Love Has Found It's Way, Ain't That Loving You, Girl I Got A Date plus a couple more but generally there is more than enough here  to make this a worthwhile purchase, especially when you can pick it up for just under £5 and it contains the classic songs he recorded with Niney, Wolves And Leopards and Westbound Train.