The frontman of Third World releases an EP ahead of his forthcoming new solo album.

One of the busiest people in all of Reggae music, Bunny Rugs, is in the process of setting forth an extremely active 2011 for himself. Along with fronting the mighty Third World, touring with them and currently being involved in promoting material from their latest release, the very well received 'Patriots' album, Bunny is also exploring solo works this year, which will ultimately lead to... Yep - Another album. 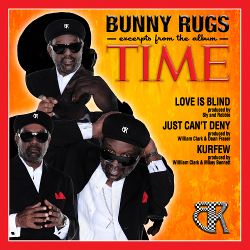 In the meantime, however, fans who just can't get enough of Bunny Rugs can look forward to getting their hands on a three track digital EP/album preview from the sweet singing and incomparable veteran through Raw Edge Productions. The EP includes Love is Blind which was Rugs' cut of the Tune In Riddim from the famed Sly & Robbie. Also present is the lovely Just Can't Deny which features production from the great Dean Fraser and was actually penned by Richard Bell of Star Trail. And finally, the EP also contains the big social commentary, Kurfew, arguably the best of the trio, which is produced by the venerable Mikey Bennett along with Rugs, himself.

The new EP from Bunny Rugs is set to reach digital stores across the globe on May 3, with the album, 'Time', coming later this year.